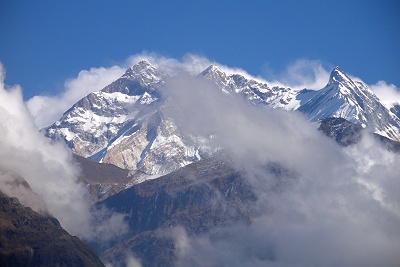 Annapurna is a series of peaks in the Himalaya, a 55-km-long massif whose highest point, Annapurna I, stands at 8,091 m, making it the 10th-highest summit in the world and one of the 14 "eight-thousanders". It is located east of a great gorge cut through the Himalaya by the Kali Gandaki River, which separates it from the Dhaulagiri massif. (Dhaulagiri I lies 34km west of Annapurna I.) Annapurna is a Sanskrit name which is translated as Goddess of the Harvests. In Hinduism, Annapurna is a goddess of fertility and agriculture and an avatar of Durga.

Annapurna peaks are among the world's most dangerous mountains to climb, with a fatality rate of 40%. As of 2005, only 103 successful summits have been made, for the loss of 56 lives, many to the avalanches for which the mountain is known. Climbers killed on the peak include famed Russian climber Anatoli Boukreev in 1997 and Christian Kuntner in 2005.